Those of you who follow me on Instagram will know that we managed to grown a few humungous green squash of some uncertain variety in our back garden this year.   The last one harvested this week weighed in at over 5 kg!

I was expecting them to be a green variety of butternut but they turned out to be much less flavoursome than the nutty butternuts so I have had to be inventive and a bit sneaky to get the family to eat them, especially my generally vegetable averse son who wouldn’t go near anything if he thought it contained squash.

So, I have been experimenting – these are a couple of recipes I will be making again – especially since hubby and son are off to buy a pumpkin to carve today so there will be even more to use.

Home made pizza is a firm favourite in our house.  We like that the toppings can be tailored to each family member to avoid waste.

I searched for pumpkin pizza dough recipes and came up with several paleo or gluten free versions but I wanted to make it as close as possible to our usual pizza base so no-one would know the difference, and to keep it as simple as possible, because who has time for recipes involving about 20 ingredients? So I experimented with a basic pizza dough recipe: 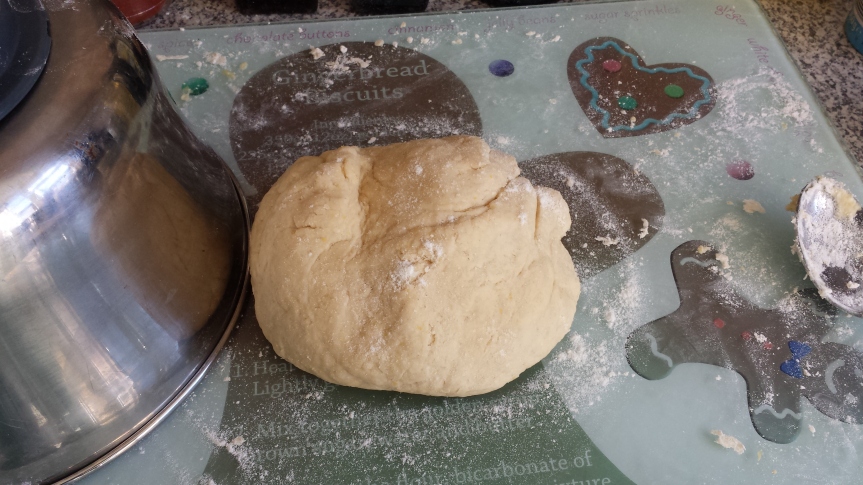 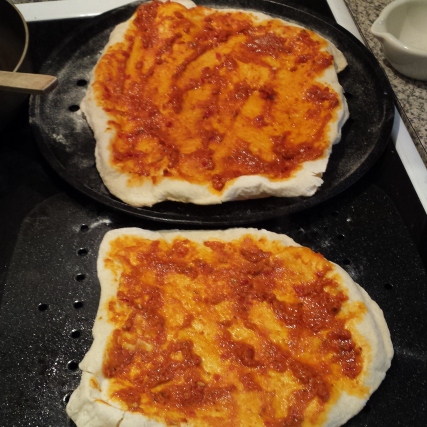 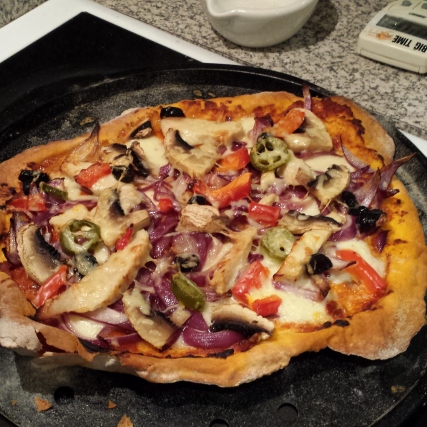 UPDATE – THERE IS AN EVEN EASIER WAY:  This came out so well I was confident enough to experiment with using pumpkin puree in my bread machine.  If you have a bread machine with a pizza dough programme you can use that and simply replace the water with an equal volume of pumpkin or squash puree.  I also tried the same with a regular white bread programme to make bread with hidden veg content.  No-one noticed the difference!

I made this with butternut squash a few weeks ago.  The method is pretty much the same as for wholemeal dried pasta but I used white flour and substituted the squash puree for the water. Pasta has to be my son’s favourite meal so if I can crack finding a homemade version he really likes it will be great.

Peel, dice and cook your butternut squash or pumpkin until tender by either boiling, steaming or roasting.   I started mine off on the hob and left it cooking in my Wonderbag while I was out at a class.  Perfectly cooked by the time I came home.

Mash or blend the squash to a smooth puree:

Mix the dough either by hand or in a food processor – with the ratio of 1 cup puree to 2 of flour until you have a nice dough.  I didn’t measure it carefully and used too much puree so the dough on the right is rather too wet.  This is easily rectified by adding more flour until the consistency is right. (At this point I found I had run out of flour so had to dash to the shop for some more ). 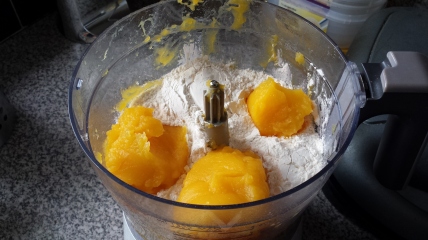 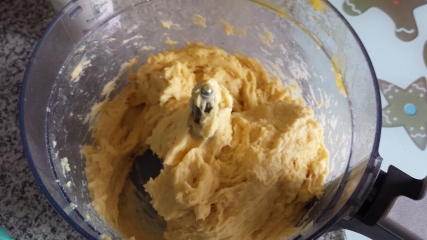 Roll the dough into a ball, cover (with an upturned mixing bowl )  and leave to rest for about 10 mins.

Then, on a well floured surface, roll the dough out to be nice and thin – thinner than I managed would be good – I definitely need more practice, or a pasta machine.

Leave them as noodles or form into your desired shape.   Either cook in boiling water for a couple of minutes or dry for future use.  When dry they will need to be cooked for 8-10 minutes. 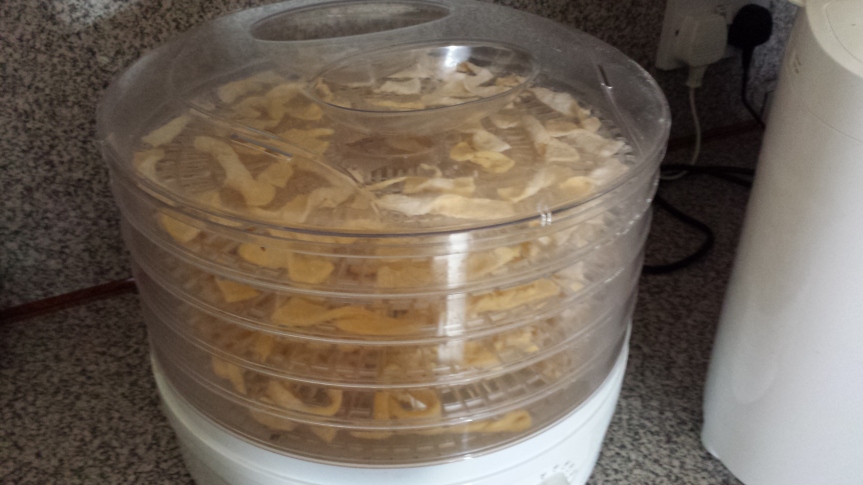 Happy to report that both the pizza and pasta were happily eaten with son none the wiser that he had been eating more vegetables.

As well as these I made spicy soup, cheesey pumpkin scones and pumpkin muffins, pumpkin marmalade which if it passes the taste test will be given as Christmas gifts, and have lots of diced and pureed squash in the freezer for future use so would love to hear more ideas for using up that pumpkin and squash. What’s your favourite recipe?

Follow Homegrown and Foraged – a green lifestyle blog on WordPress.com

Another batch of vegan chocolate brownies waiting to be cool enough to cut. These incorporated 3 ingredients that might otherwise have gone to waste - pulp leftover from making almond milk, the liquid from a can of chickpeas (which I had frozen until needed) and some lumps of cinnamon and sugar saved from making cinnamon spiced almonds as Christmas gifts. #wastenot #zerowaste #treadingmyownpath #aquafaba #veganbrownies #nofoodwaste #chocolatebrownies #chocolate #sweettreat #veganuary #parttimevegan #plantbased #veganuary2020 #zerowastebloggers #westsussexbloggers #zerowasteuk #journeytozerowaste #sussex #chichester
#Repost @zerowastehannah Isn't this fab? • • • • • TOY LIBRARY 🥁⁣🤹‍♀️🎲 ⁣ Every library in West Sussex has a toy library - how great is that?! ⁣ ⁣ For a one off payment of £2, you can then rent toys for free: from baby toys up to grown up toys like 'Bop It!'⁣ ⁣ This isn't the best photo but there are some lovely wooden toys and a great selection. The toys are all cleaned by library staff between loans. Such a great idea to reduce toy waste!⁣ ⁣ #westsussexlibraries #westsussexlibraryservice #henfield #henfieldhub #sustainablehenfield2030 #toylibrary #westsussex #westsussexcouncil #borrowdontbuy #reuse #circulareconomy #lendinglibrary #wasteless #sharing #plasticfree #savemoney #zerowastesussex #zerowastechildren #zerowaste #zerowastehannah
This is just a small selection of my mismatched spice jars - just those needed for tonight's curry. Most have been refilled @refilled_chichester - if you have access to a good refill shop you'll likely find spices are cheaper than in the supermarket. My spices are all stored in a drawer so I had to put the names on the top to have a chance of finding the one I need. It's still often a challenge and I have ended up with some duplicates as a result so organisational tips always welcome 😀. #spices #curry #homemade #cooking #refill #zerowaste
Veganuary Day 18: stack of flatbreads made using my breadmachine. 1 batch of pizza dough with some additional mustard seeds and nigella seeds. Split into 6, roll out thinly then dry fry in a pan. Warning - it might smoke out your kitchen so make sure you have the extractor fan on high! One of the few vegan meals the rest of the family will eat is curry so I'm also making saag aloo and a #waitroserecipes spiced butternut squash and cauliflower dhal recipe I've had on file for ages but not tried before so we can all eat a vegan main meal today. #veganuary #parttimevegan #plantbased #veganuary2020 #flatbread #homemade #baking #zerowaste #cookfromscratch #lesswaste #naanbread #pizzadough #panasonic #breadmachine #imadeit #whatveganseat
Sourdough bread. More successful than colouring my hair with henna. #sourdough #noplastic #homemade
Prepping ahead - 1 bowl of sourdough about to be covered with a pan lid, and one bowl of henna (a rare use of cling film from a roll we've had for years). Both need to be left overnight to do their thing. Last time I tried henna it didn't do much so I'm really hoping leaving the mix longer before applying, and probably longer on my hair as well, will work better as I'm missing the red hair but don't want to go back to box dyes. Especially as I'm using a flexi day from work to apply it. Fingers crossed 🤞 #nopoo #naturalhaircare #henna #fermenting #prepping #sourdough #bread #hairdye #haircolour

Dream a Little Green with Me

- The journey to a more sustainable life

Blogging the high's and low's of growing, foraging & making my own food & drink

Swapping, switching and ditching our way to a Zero Waste lifestyle.

Downshifting on the outskirts of Beantown

On My Way to Zero Waste
The Earthbound Report

Good lives on our one planet

The cause and effect of events on life.....

My husband calls me a hippy!

Can we live without waste?

Two steps forward, one step back on the path to a greener life

The Un-Fuck Up This World Experiment
the Galwegian Vegan

British food in all its glory. This is also the sister-blog to my other project, Neil Cooks Grigson

Social activism in the absence of political agency... It's a long story...

A Blog About Maximising Resources And Minimising Waste

Detox to Retox and everything in between...

Make money, save money and live the life YOU want

Vermont based lifestyle blog. Musings of a modern mama on zero waste, minimalism, and enjoying a simplified but full life.

A mother, a housewife, a baker, a cook and a crocheter, just your average 30 year old with too much to do and too little time!

waste not want not

a blog about trying to live with less

Whack It With a Hammer

Adventures in DIY and Decor

Helping you to live a more sustainable & simple life

A Refuge For Daffodils

zero waste living in the Kootenays

A place with natural, environmental and healthy resources